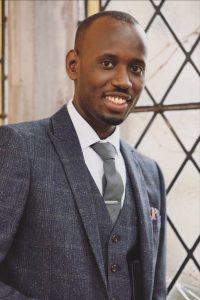 Benjamin Karenzi is an award winner of the 2017 Joint Fully Funded Scholarship from the University of Aberdeen and the Government of Rwanda, and a 2009 award receiver from the Rwanda Office of the Ombudsman for his role in the promotion of values of ethics and integrity amongst youth In Rwanda and East Africa, Benjamin has also served as a Student Ambassador for Postgraduates at the University of Aberdeen.

Benjamin is the Founder and CEO of Direct Derivatives a start-up company that deals in educational robotics and energy. A first-class graduate from the University of Aberdeen with MSc in Oil and Gas Enterprise Management and member of the Association of International Petroleum negotiators. His experienced in international business, negotiations, energy economics and management in engineering and telecommunications.

He championed ONA (One Network Area) the East Africa Heads of State’s instruction to cut roaming rates across the region. The instruction was a game changer, it required creative thinking to detect new business opportunities in terms of VAS in order to recover from a negative margin it caused, and it turned out a success. In 2016, he was nominated as a lead member to design and implement MTN Group Hello World proposition aiming to provide a simple, affordable and predictable roaming rate across the world. Together with the lead team, he worked strategically to achieve a complex pricing logic and to cover key destinations in Europe, USA, Middle-East, Africa, Asia and Latin America by negotiating lower wholesale rates.