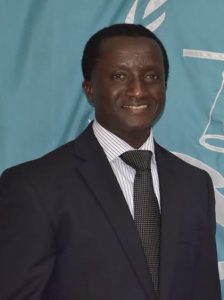 Dr Buba Bojang is the Nippon Foundation Lecturer on Global Ocean Governance at the IMO-International Maritime Law Institute, Malta. He worked as a State Counsel at the Attorney General Chamber and Ministry of Justice of The Gambia (2007 – 2012), and Legal Officer of the Gambia Armed Forces (2007 – 2013).

He obtained LL. B and B.L. from Nigeria (2006 and 2007 respectively). In June 2010, Dr Bojang obtained Advanced Diploma in Military Law Development programme from the United States Defense Institute of International Legal Studies, Newport, Rhode Island. He obtained LL.M. Degree with distinction from the IMO – International Maritime Law Institute, Malta (2011) and worked at the Gambia Maritime Administration as Legal Officer and Registrar (2011-2016).

His publications include ‘The Place of Joint Development in the Sustainable Governance of the Arctic’ in Lawrence P.H and others (eds) Sustainable Shipping in a Changing Arctic WMU Studies in Maritime Affairs (Springer 2018); ‘The Gambia and the Law of the Sea’ in Patrick Vrancken and Martin Tsamenyi (eds) Law of the Sea: The African Union and its Member States (JUTA Law 2017), and ‘The Relationship between Economic Exploitation and Management: An Analysis of the Continental Shelf Regime’ in Patrick Chaumette (ed) Economic Challenge and
New Maritime Risks Management: What Blue Growth? (2017).