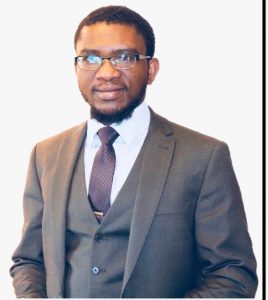 Hakeem Tahiru is currently a law doctoral research candidate at the School of Law, University of Aberdeen; Scotland, United Kingdom. He holds academic qualifications in Bachelors of Arts in (B.A) Political Science and Information Studies from the University of Ghana, Legon; Master of Laws in (LLM) Petroleum Law &amp; Policy from Centre for Energy Petroleum &amp; Mineral Law &amp; Policy (CEPMLP), University of Dundee, UK. Achieving excellence has been the hallmark of Hakeem Tahiru in both academic and non-academic endeavours.

In the field of work, Hakeem Tahiru has had the privilege to work in the National Parliament of the Republic of Ghana from November 2010 until August 2012, as the Research Assistant in the office of the then Deputy Majority Leader and (who also was and still is) Member of Parliament for Wa Central Constituency. He has also worked at the Upper West Regional Secretariat of the National Youth Authority (NYA) of Ghana, between 2006 and 2010,
through series of work internships and has played pivotal role in the initiation and implementation programs for youth empowerment. For instance, I was assigned, by the regional secretariat, to lead a team to establish the Upper West Regional Youth Parliament and I accomplished just that with precision.

Moreover, in the arena of leadership, Hakeem Tahiru holds unique capabilities, exceptional competencies and a great promise. He has stood at the forefront of youth and student leadership from elementary school through high school to university education. At the University of Aberdeen Law School, I was bestowed with the singular privilege to serve as the Secretary of the Legal Research Society (LRS) and subsequently given the privilege to
serve as the president of the LRS, from September 2017 to September 2018. The LRS is an association which membership comprises all the Postgraduate Research Students (PhD in Law and LLM by Research Students) actively studying at the School of Law, University of Aberdeen. My functional roles as the president of the LRS included (but not limited to) chairing LRS Monthly Forums – the LRS main decision-making platform, presiding over
LRS Executive Committee meetings, attending the Law School Research Policy meetings (on behalf of the LRS members), as we as supporting LRS members to access the best advice and support services from colleague LRS members and staff of the Law School. As president of the LRS, I, with support of my colleague LRS Executive Committee Members, mobilized technical and financial support from LRS members, as well as from administrative and academic staff of the Law School, to successfully organize Mock Capstone Conferences, the
SpeakEasy Conference 2018, Induction Program for new PhD students (under the auspices of the Law School) and the maiden LRS Annual Research Conference 2018.

Whilst studying at the University of Ghana for my first-degree program, I led several student societies, notably, I was of the two Deputy Speakers of the University of Ghana Student Parliament, I served the president of the Upper West Students Union (UWESU) and also served in different capacities in the Sissala Student Union, Education Development Fund (EDUFund), Nandom Secondary School Old Boys Association (NASOBA), among others.

It is worth mentioning that I am a member of considerable number of professional associations, namely, Student Member of the International Bar Association, Student Member of the Association of International Petroleum Negotiators (AIPN), and the Student of the Association University Technology Managers (AUTM).  In furtherance to the above, Hakeem Tahiru is also a consummate creative writer, especially in poetry. He has written an anthology of over 200 poems, pending publication, across different themes such as politics, morality, justice, love, peace and Pan-Africanism, among others.

Hakeem Tahiru’s ongoing PhD research at the School of Law, University of Aberdeen, examines the legal challenges and prospects of technology transfer law enforcement and compliance in developing countries under the current stringent global intellectual property legal regime, with particular focus on crafting and recommending an optimal technology transfer legal model for Ghana.